Nausicaä of the Valley of the Wind is a manga by Japanese anime director Hayao Miyazaki that ran from 1982 to 1994. It tells the story of Nausicaä, a princess of a small kingdom on a post-apocalyptic Earth with a bioengineered ecological system, who becomes involved in a war between kingdoms while an environmental disaster threatens humankind. The manga was serialized intermittently in Animage from 1982 to 1994 and the individual chapters were collected and published by Tokuma Shoten in seven tankōbon volumes. It was serialized with an English translation in North America by Viz Media from 1988 to 1996 as a series of 27 comic book issues and has been published in collected form multiple times. Since its initial serialization, Nausicaä has become a commercial success, particularly in Japan, where at least 11 million copies have been sold.

The story is set in the future at the closing of the ceramic era, 1,000 years after the Seven Days of Fire, a cataclysmic global war, in which industrial civilization self-destructed. Although humanity survived, the land surface of the Earth is still heavily polluted and the seas have become poisonous. Most of the world is covered by the Sea of Corruption, a bioengineered toxic forest of fungal life and plants which is steadily encroaching on the remaining open land. It is protected by large mutant insects, including the massive Ohmu. Humanity clings to survival in the polluted lands beyond the forest, periodically engaging in bouts of internecine fighting for the scarce resources that remain. The ability for space travel has been lost but the earth-bound remnants of humanity can still use gliders and powered aircraft for exploration, transportation and warfare. (Powered land vehicles are completely nonexistent, with humanity regressed to dependence on riding animals and beasts-of-burden.) 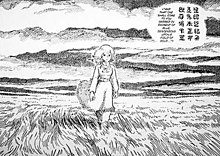 The Dorok prophecy: “And that one shall come to you garbed in raiment of blue and descending upon a field of gold…”

When the Valley goes to war, she takes her ailing father’s place as military chief. The leaders of the Periphery states are vassals to the Torumekian Emperor and are obliged to send their forces to help when he invades the neighboring Dorok lands. The Torumekians have a strong military, but the Doroks, whose ancestors bioengineered the progenitors of the Sea of Corruption, have developed a genetically modified version of a mold from the Sea of Corruption. When the Doroks introduce this mold into battle, its rapid growth and mutation result in a daikaisho (roughly translated from Japanese as “great tidal wave”), which floods across the land and draws the insects into the battle, killing as many Doroks as Torumekians. In doing so, the Sea of Corruption spreads across most of the Dorok nation, uprooting or killing vast numbers of civilians and rendering most of the land uninhabitable.

The Ohmu and other forest insects respond to this development and sacrifice themselves to pacify the expansion of the mold, which is beyond human control. Nausicaä resigns herself to joining in their fate. However, one of the Ohmu encapsulates her inside itself in a protective serum, allowing her to survive the mold. She is recovered by her companions, people she met after leaving the Valley and who have joined her on her quest for a peaceful coexistence. The fact that the mold can be manipulated and used as a weapon disturbs Nausicaä. Her treks into the forest have already taught her that the Sea of Corruption is actually purifying the polluted land. The Forest People, humans who have learned to live in harmony with the Sea of Corruption, confirm this is the purpose of the Sea of Corruption and one of them shows Nausicaä a vision of the restored Earth at the center of the forest. Nausicaä travels deeper into Dorok territory, where her coming has long been prophesied, to seek those responsible for manipulating the mold. There, she encounters a dormant God Warrior who, upon activation, assumes she is his mother and places his destructive powers at her disposal. Faced with this power and its single minded and childlike visions of the world, she engages the creature, names him and persuades him to travel with her to Shuwa, the Holy City of the Doroks.

Here she enters the Crypt, a giant monolithic construct from before the Seven Days of Fire. She learns that the last scientists of the industrial era had foreseen the end of their civilization. They created the Sea of Corruption to clean the land of pollution, altered human genes to cope with the changed ecology, stored their own personalities inside the Crypt and waited for the day when they could re-emerge, leaving the world at the mercy of their artificially created caretaker. However, their continual manipulation of the population and the world’s environment is at odds with Nausicaä’s belief in the natural order. She argues that mankind’s behaviour has not been improved significantly by the activities of those inside the crypt. Strife and cycles of violence have continued to plague the world in the thousand years following their interference. She orders the God-Warrior to destroy its progenitors, forcing humanity to live or die without further influence from the old society’s technology.