Hetalia: Axis Powers is a Japanese webcomic, later adapted as a manga and an anime series, by Hidekaz Himaruya. The series’ main presentation is as an often over-the-top allegory of political and historic events as well as more general cultural comparisons. Characters are personifications of countries, regions such as Hong Kong and micronations with little reference to other national personifications. Both positive and negative cultural stereotypes form part of each character’s personality.

The main storyline’s events occur during World War II, but the vast majority of the comics take place during other historical events, modern holidays, or at no specific time whatsoever. The series often uses satire and light-hearted comedy to reinterpret well-known events as well as less common historical and cultural trivia. Historical, political, economic, and military interaction between countries is generally represented in Hetalia as social interactions and misunderstandings between the characters.

Himaruya originally created Hetalia as an online webcomic, and so far six tankōbon have been published by Gentosha Comics, the first on March 28, 2008, the second on December 10, 2008, the third on May 20, 2010, the fourth on June 30, 2011, and the fifth on July 31, 2012. English translations of the first two volumes have been published by Tokyopop in the United States, the United Kingdom and Canada. Both printed volumes published so far have topped The New York Times manga best seller list. As of May 2012 the English-language version of the manga was published by Tokyopop via Right Stuf Inc.

The original Hetalia: Axis Powers webcomic was adapted into six tankōbon and published by Gentosha Comics under the manga imprint Birz Extra. The first volume was released on March 28, 2008, the second on December 10, 2008, the third on May 20, 2010, the fourth on June 30, 2011, and the fifth on July 31, 2012. There is soon to be a seventh volume of the Hetalia manga books, although this seventh book will be the first volume of Hetalia: World Stars. Every tankōbon except the first were released as a standard edition and a special edition that included an extra small booklet. The first two volumes sold over a million copies by late 2009.

In January 2009 Anime News Network reported that the series would also begin serialization in Gentosha’s seinen manga magazine Comic Birz starting in the April issue, but this was later announced to be a publishing error. The Gentosha press release on which ANN had based their article actually referred to a new series by Himaruya, Chibisan Date. Amazon.com has listed Hetalia: Axis Powers as being licensed by Tokyopop for a North American release, with the first volume released on September 21, 2010. After Tokyopop withdrew from the English language market in 2011, Right Stuf has been publishing the Hetalia manga in English since May 2012. On July 7, 2013, Tokyopop announced via their Facebook page that Tokyopop and Right Stuf are teaming up to being out Hetalia Volumes 4 and 5 in Winter 2013.

So far, over 60 countries and territories have been depicted. There have also been historical figures depicted, such as (but not limited to) Maria Theresa, Roman emperors, Napoleon Bonaparte, Leonardo Da Vinci and Jeanne d’ Arc. There are also personifications of other figures, like General Winter, the United Nations, Italy’s tanks and every country’s Mr. Newspaper.

The following countries are the 8 main roles in this manga. 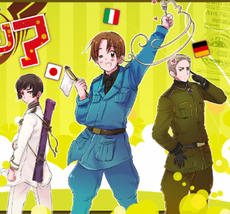 The Axis Powers, the main characters of the Hetalia series. From left to right: Japan, North Italy, Germany

The Axis Powers group of characters consists primarily of Germany, Italy, and Japan (the Axis Powers of World War Two), who are also the protagonists of the series.

usually shortened to just Italy is the primary protagonist and the title character, portrayed as a bright, energetic, and mostly sweet young man. In the series, he is depicted at various points as the infant grandson of the Roman Empire and is recognized as one of the weakest characters in the series as well as a carefree and cowardly soldier who often surrenders without a fight, usually by waving a white flag. His artistry and love of pasta and pizza are references to stereotypical Italian culture. He uses his adorable ways and cute face to charm girls he meets. He is portrayed as a “loveable loser”. Despite looking weak and helpless, Italy is viewed as being strong as a child, being able to defeat Turkey single-handedly during his golden days. According to Himaruya, Italy is strong, but because of his cowardice he doesn’t show his strength.
Italy Veneziano represents the northern half of the country, while his older brother Romano represents the southern half. Hence, their full character names are Italy Veneziano and Italy Romano respectively.
In the anime series, both Veneziano and Romano are voiced by Daisuke Namikawa in Japanese. In English, Veneziano is voiced by Todd Haberkorn and Romano is voiced by Ian Sinclair. Young Italy, from a common segment on the show called Chibitalia, is voiced by Aki Kanada in Japanese and Brina Palencia in English.

is viewed as a hard-working, efficient, bureaucratic, and serious man. In the series, Germany is primus inter pares among the Axis Powers, and takes responsibility for the training of Italy and Japan. He is tall, muscular, with blond hair and blue eyes (possibly a reference to the National-Socialist concept of an Aryan Master Race) and usually wears military fatigues, uniforms, or formal wear. Although he has a tendency to act aggressively to other characters he encounters (in particular Italy and Japan), he can sometimes show a kinder side to his personality. Another aspect of his character is his relative inexperience with relationships, leading him to be very by-the-book as a result of the belief that things will go wrong if he does not follow instructions to the letter. Despite this, as the series progresses, he forms a close friendship with Italy. In the anime series, he is voiced by Hiroki Yasumoto in Japanese and Patrick Seitz in English.

is a reclusive and hard-working man. He seems to have a problem with others being in his personal space, for he gets uncomfortable if anyone touches him or gets too close, though he does seem to have gotten used to this to some extent. In the series, he is shown to be inexperienced with the Western world, and prone to culture shock; but he also finds fascination in the ways of other nations since he takes photographs of cultural oddities in other countries’ lands. A young man, his character design features dark brown eyes and black hair, common physical traits among Japanese people; and has the attire of an officer of the Japanese Navy. He often tries to adopt the cultures of other countries he meets such as France, or when other countries meet him such as America. He “senses the mood and refrains from speaking”. Generally quiet, he is often depicted with the attitude of a businesslike old man. In the anime series, he is voiced by Hiroki Takahashi in Japanese and Christopher Bevins in English. Young Japan is voiced by Alexis Tipton in English.