An anime television adaptation by Madhouse began airing in April 2015 and a live action film adaptation of the same name was released on October 31, 2015.

In November 2014 it was announced that the series was being adapted into an anime series. The anime was directed by Morio Asaka at Madhouse, with Natsuko Takahashi as the scriptwriter and Kunihiko Hamada as the character designer. The anime began airing on NTV from April 8, 2015 and is being simulcast by Crunchyroll. The opening theme is “Miraikei Answer” by Trustrick while the ending theme is “Shiawase no Arika” by Local Connect. The soundtrack is composed by S.E.N.S. Project. The final episode of the series, originally scheduled for September 16, 2015, was delayed to September 23.

A live action film adaptation of the same name was released on October 31, 2015. It starred Ryohei Suzuki, Mei Nagano and Kentaro Sakaguchi.

Takeo’s next door neighbor, childhood friend, and classmate, who he calls “Suna” for short. Compared to Takeo’s boisterous personality, Makoto is level-headed, studious, and rational, though he will occasionally burst into stifled laughter upon witnessing Takeo’s unique behavior. Because Makoto is so handsome, all of the girls Takeo liked ended up falling in love with Makoto instead. Despite his endless stream of admirers, Makoto remains single, as he rejected every girl that’s confessed to him because of their insulting comments they made about Takeo. Although not nearly as outgoing as Takeo, he nevertheless values his friendship, noting that his life would be “boring” if Takeo were not around. Makoto is always watching out for Takeo and is willing to sacrifice his own happiness for his friend.

Makoto’s older sister and a college student. Takeo mentions that she, like her brother, is a great and kindhearted person. She has had a secret crush on Takeo ever since he compared her to a flower when they were children. Only her brother and her colleague Oda know about her feelings for Takeo.

Takeo’s mother, who always works hard for her family. Takeo is extremely protective of her, though she insists he worries for no reason as she was once an amateur wrestler and when she was giving birth to Takeo she actually helped carry another woman into the maternity room when she went into labour first. 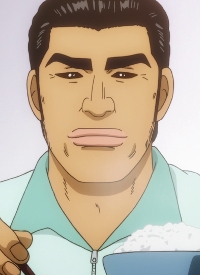 Takeo’s father, who has a rather handsome appearance. He fell in love with Takeo’s mother when he saw her put herself in harm’s way to protect someone else and decided he wanted to be the one to protect her.